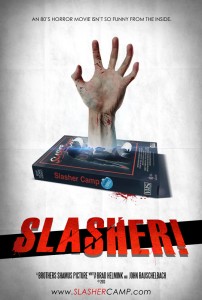 SLASHER! is a horror/comedy story that pays homage to the classic horror movies of the 1980s. It’s Hot Tub Time Machine meets Friday the 13th, with everything we loved from the slasher genre, without getting lost in satire. 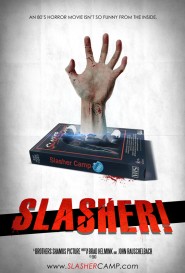 Waking up in an ‘80s horror movie, an egotistical ladies-man is forced to befriend the clichéd characters and avoid the hulking killer by changing his ways or he may never find a way out.

Scott (Late 20s): He’s likable, despite being a bit selfish when it comes to helping out his friends and ruining most of his relationships with women.  After his latest run-in he wakes to find himself inside a 1980’s horror movie.  Will he be able to change his ways and help his new friends survive the wrath of Billy Volcheck?

The Killer (??): All we know about Billy Volcheck are the stories passed down around campfires.  He was a young boy at Camp Raven Lake before it was abandoned years ago.  The campers shouldn’t have picked on little Billy Volcheck because he came back one year and killed them all before being set on fire and disappearing into Raven Lake.